When my husband mentioned that we were co-sleeping with baby to his colleagues, they seemed to have negative perceptions about it. It seemed to be a new concept, something so alien they couldn’t fathom. He was even asked whose fault it was. To which he said, it was both of us since we both loved sleeping with our baby. 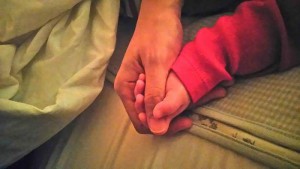 There are parents who are used to co-sleeping like it was the most ordinary thing in the world, and obviously, there are those who do not believe in it. However, I am realising that more and more parents give in to co-sleeping although they don’t seem to talk about it as openly.

Since it seems to be common, this will probably still remain to be a hot topic among parenting circles.

I remember my sister encouraging me to breastfeed in bed when my baby was still a newborn. She said it will help me a lot. But I was way too scared… I thought room-sharing was the way to go. I didn’t mind waking up ever so often to breastfeed and put my baby to sleep – even if I was so exhausted. I read so much information about Sudden Infant Death Syndrome or SIDS that it made me so afraid. I didn’t want to hurt my baby in any way especially when she was asleep.

I trained her to sleep in her bassinet and I was successful. However, when we travelled out of the country, there were times when I couldn’t make her sleep in a cot since there was none available. So, that’s when we started co-sleeping even if I didn’t want to. It felt so awkward at the start. On her 5th month, she just wouldn’t sleep in her cot anymore! We kept trying to put her there, but she just cried her lungs out! She was so happy with co-sleeping and I suppose there’s no more turning back for her.

Even if I wanted to put her in her own bed, I have to admit that I had mixed feelings about it. My husband and I wanted to sleep beside each other, but we both enjoyed sleeping with our baby between us. That meant less bed space and having more awareness and sensitivity at all times, but we were happy about it. 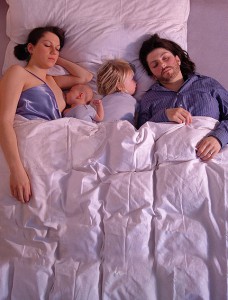 Before we practiced co-sleeping with baby, I would wake up every 2-3 hours and pick up my baby from her bassinet, feed her for 30 minutes to 1 hour, burp her, and put her to bed. I literally felt like a zombie at the beginning. There were even times that I hardly had no sleep during her growth spurts or leaps. Those were times that my nursing chair and pillow became my best friends. I missed my bed…

With co-sleeping, I don’t need to drag my feet out of bed and stay on my nursing chair while I feed and rock my baby to sleep. All I needed to do was to lie down beside her, put out my breast and feed her. And I can easily switch to the other side after even if my eyes were closed. Simple and easy.

Exclusive breastfeeding is recommended for the first six months from the time the baby is born because it provides nutrition and protects them from illness. It even helps lower the risk of type 2 diabetes, ear infections, childhood obesity, diarrhea and vomiting, and even SIDS!

A new study published in Acta Paediatrica found that mothers who sleep next to their newborns are more likely to continue breastfeeding for a longer period of time than mothers who do not bed-share. It also indicates that pregnant women who expressed a strong desire to breastfeed were more likely to share the bed with their babies.

The researchers at Durham University, had a sample of 678 women at mid-pregnancy who participated in a random breastfeeding trial. They were questioned whether the fear of Sudden Infant Death Syndrome or SIDS may hinder them from sharing a bed, which in turn, may prevent them from breastfeeding as long as they wanted.

The women sent weekly reports of their breastfeeding and bed sharing movements for 26 weeks following the birth of their baby.

The study significantly showed that those women who were breastfeeding frequently were still breastfeeding over 6 months, as compared to those who rarely or never breastfed.

“These mothers therefore need information on how to make bed sharing while breastfeeding as safe as possible.”

“Women with strong motivation to breastfeed frequently bed-share. Given the complex relationship between bed-sharing and SIDS appropriate guidance, balancing risk minimisation with support for breastfeeding mothers is crucial.” 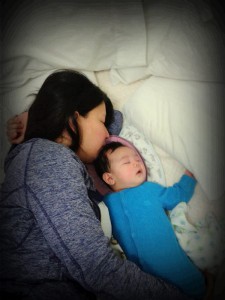 Co-sleeping really saved my sanity! It allowed me to have more sleep. It became normal to fall asleep with exposed breasts. Except when my baby was teething, she would easily fall asleep.

If she could probably speak, I’m pretty sure that she would say how much she looks forward to sleeping time with mom and dad.

We just make sure that she is sleeping on her back, her face is uncovered, and we don’t swaddle her so she can move.

While I was so afraid of squishing her before, I noticed that you will eventually lie on your side in a position where you can be in direct contact with you baby. Her head is usually at the same level as my breasts.

You will also be more conscious and aware that your baby is there and that position also allows you to observe them well.

At 3-4 months, my baby used to cry and cry when I let her dad take care of her. I suppose she felt some sense of separation anxiety whenever she can’t see me. Our bond was so strong that I also wanted her to be close to her dad. And I have to say that co-sleeping helped a lot! Their emotional connection has become so strong! In fact, after she breast feeds, she tends to go nearer her dad to sleep.

Her dad has suddenly become her comfort blanket. I just love watching both of them sleep. There’s a certain level of contentment and happiness.

Sleeping beside our baby has also helped us stop her from scratching herself, check if she is overheating, or if she has fever. 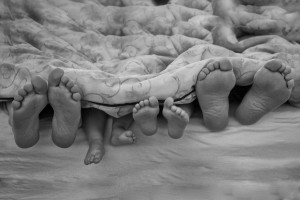 Here are some tips to remember should you consider co-sleeping with baby:

If you would like to know more about Safe Infant Sleeping, you can read more about it here. While the safest place for your baby to sleep is in their own cot by the side of your bed, it is helpful to weigh the benefits and risks of co-sleeping with baby.

I would love to hear your thoughts and experience on co-sleeping and breastfeeding. Share your comment below.

What Mom Never Told You About Breastfeeding and Lack of Sleep

Why Breastfeeding is Best for Babies and Why It Felt Right